With there being so many traditional costumes in brick and mortar stores, I was looking for that special costume that didn’t fit that bill and went browsing Halloween costumes online.  When I did, I found myself looking at sexy 80’s costumes to see if there was anything that would strike my fancy.  In doing so, my daughter saw what I was doing, and said “Mom – mom! See that costume, I want it.”  Well, ‘that’ costume she picked out was not happening!  She’s a young teenager and I have to put limits on what is acceptable and not acceptable…besides – I wasn’t looking for a costume for her!  As I continued to browse through the costumes with eyes peering over my shoulder, I hear her say, “Oh mom, you have to get me that costume, please – begging me” referring to the Women’s Deluxe 80’s New Wave Costume below.
I had to ask, “Why that one?”  She says, “It’s really cool, I will look like I glow-in-the-dark .”  You have to know my daughter – anything that is glow-in-the-dark  is for her.  Anything that turns her tongue blue – is for her.  I told her if I got that costume for her, she’d HAVE to wear leggings and there’d be no heels like in the picture, and – no heavy make-up.  She agreed. She asked if she could put colored hair spray in her hair; which that’s fine with me that washes out.
I proceeded to order the costume.  I ordered an extra small after viewing the size chart, which I will say, is very accurate.  I knew the costume may be a tad bit big because she’s between a 3 and 4.  However, as far as length – since she’s so tall, ordering a woman’s size works better than children’s XL costumes.  I then made a huge mistake by telling her I ordered it.  Well – every day until it’s arrival, I heard – did the costume arrive yet?  Did you get the mail today?  Can we go get the mail?  When will it get here?  She was driving me nuts!!  Finally, I was put out of my misery and the package came. She opened the package and headed right in to try it on.  I hadn’t even gotten to check it out! 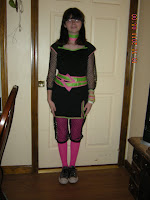 When she came out with it on – I have to say, it was adorable!  This picture doesn’t do her, or the costume, justice.  All those bracelets on her wrist matched the colors in the costume.  She put on her leggings that I said she had to wear. The rest will follow on Halloween.  Those sneakers on her feet – won’t be on her feet – they take away from the costume big time.
Finally, I got to examine the costume up close!  The quality of the fishnet leggings had me a bit worried after placing the order.  Much to my amazement; these leggings are not a thin fishnet, and have been sewn so they won’t come undone or tear along the seems.  The rest of the costume is made of polyester and has substance to it.  The seams were well constructed so I don’t have to worry about them coming apart by the end of the night.  In fact, she’ll get a lot of use out of this costume and that pleases me.
The Women’s Deluxe 80’s New Wave Costume can be purchased at Sexy Costume Discounters for $34.99.
*No monetary compensation was involved in this review.  All opinions are 100% mine and are my truthful opinions of the product.