I hope you had a good week…myself, I am so glad this past week is done and over.

My son’s evening LNA of 17 yrs., was hospitalized Thursday and the docs aren’t even sure what she has.  Blood cultures come back tomorrow and depending on what they show…she may have to have a spinal tap to rule out meningitis.  I am so praying this isn’t the case.  That’s all my son would need now. The Doc’s tell me it will be close to a year before he will fully recover from the post viral pneumonia which caused him to be intubated back in March. They also say he will be susceptible to other illnesses more so during this time.

I then get a call from the Home Health Agency…no LNA coming this weekend.  All fine and good…except my son decided he was going on what I call ‘strike’ Saturday.  This means he stops eating and drinking after the first meal of the day.  I am hoping I don’t get a call from Easter Seals saying his day support person isn’t coming in on Monday.  I could care less if he eats…he won’t starve to death by any means…but the not drinking is not good.

Okay…so then let’s add, one of my friend’s sons killed himself this past week with a gun shot to his head..which decapitated him.  My friend was called over to his house to mediate a fight between her son and his wife and somewhere along the line, the fight escalated beyond no return.  Not only did he kill himself; he killed his wife too. His mother saw the whole deal as did their two children, and niece and it was her who called the police when the fight went astray.

I can’t get out of my mind how his mother will have to live with this for the rest of her life.  I can’t fathom the thought of what those little girls will remember and will have to live with…which two are old enough to do so.  It’s just the unimaginable for any mother to have to witness something like that, as well as the young children. I feel bad her son was in such emotional turmoil…he was a VERY brilliant young man…why he chose that route no one will ever know.  He came from a good home, he had two fabulous children, a great job and was full of life.  I guess no one will ever understand and no one will ever have answers. 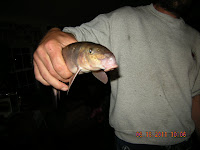 As for meeting my goal on catching me a trout this week…well I thought I had caught two last night!  I was so excited until I got home and my bubble was burst. The fish weren’t trout they were pond shiners! I was so bummed.  My daughter caught a trout though; and her friend, she caught a sucker fish.  I didn’t even know we had these things around here but I surely do know…I will NOT be putting my feet in that river!  What an ugly fish that thing is….check him out (click pic to enlarge):

During that same fishing excursion, my daughter befriended a snapping turtle.  She named him Mossy.  He had a very good dinner. I told her she could feed him a couple of worms…more like he ended up with 15! 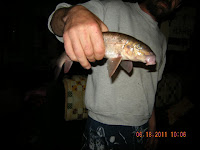 Here’s to a great week for all of us!